skip to main | skip to sidebar

I bought my first Cold Steel Pocket Bushman in 2008. I think it had just come on the market. I was looking for a good sized folder that would withstand the elements. The pocket bushman has one of the toughest locks known to knifedom (is that a word? it is now) and I wanted something that would not let go and cause a serious accident. Its hard to do firstaid on yourself one handed in the woods when your good hand is bleeding like a stuck pig.  The locking system is called Ram Safe lock and was designed by Andrew Demko. I know of no better lock. The scandi grind of the blade was another selling point with me since I was a Mora fan and built several knives with Finnish Lauri blades. The steel was an unknown when this first appeared. Now you can find good info on the net about it. It is Thyssen-Krupp 4116 stainless which has been cryogenic tempered. This process slowly takes the hot blade blank down to -300 degrees F in liquid nitrogen and keeps it there for a bit. What this does is converts the austinite in the steel to martinsite. This makes for a tougher, longer lasting steel. Do a Wikipedia search of "cryogenic treatment of steel" if you want to learn more.

Anyway, I had this knife for a long time and one day I was closing it and the spring broke inside the handle. The knife became way too dangerous to use because that extremely sharp blade just flopped around. No good! I contacted the good folks at Cold Steel and they sent me a pack of 5 springs. I guess they figured this problem would require a lot of replacements. I sold the knife with the extra 4 springs and told the buyer about the breakage possibility and how to change out the spring. I was very sad because I especially liked this knife. It sharpened up to razor edge and held it for a long time and it was sturdy. I owned and carried it daily for about 5 years before the spring incident and had heard Cold Steel remedied the problem. However, I never got around to getting one of the newer versions.

Well, a few months ago I was watching a You Tube video featuring the pocket bushman.The video showed the old version and why it was breaking springs and how it was remedied. In the old  lock bar there was an indent that the spring could bend down into and weaken it till it snapped. Cold Steel simply did away with this and made it a straight piece of steel. So far there have been no problems and this has been the case for about 10 years or so.

So, I went to my favorite store and low and behold there's a brand new sealed in the box Cold Steel Pocket Bushman with my name on it! All for the princely sum of $21.00! I got it home and took it apart. The first thing I noticed was the straight locking bar. Good. I stoned the bar where it felt like it was rubbing against the inside of the handle. Then I got out the Dremel and some felt wheels and green chromium rouge. This did a fine polish on the places I stoned (I use extra fine Scotch machinist stones down to 1000 grit). I did some minor stoning on the edges of the handle to remove and sharpness. The first thing to be left off was that useless thumb stud. Why? This is a hard opening knife and a thumb stud is just plain useless. I realize some folks like to flick their Bics and knives but save it for the smaller blades, boys. I got everything back together and tightened the star screws down and away we went. The RamSafe lock was a lot easier to pull back. Now, this knife is big. 4 1/2" blade, 10 3/8" overall when open, the 420 stainless handle is one piece construction and is 5 7/8" long. The knife is lite for its size coming in at 6.6 ounces. It has a reversible belt clip and is surprisingly slim and hardly noticeable in the pocket. Noticeable as far as feeling any bulge in your pocket-the top of the knife extends a good inch above the end of the pocket clip and the paracord lock assistant is sure to draw questions. Now I can retire my poor old worn out G-96 folder. It is so loose I'm half afraid to open it. 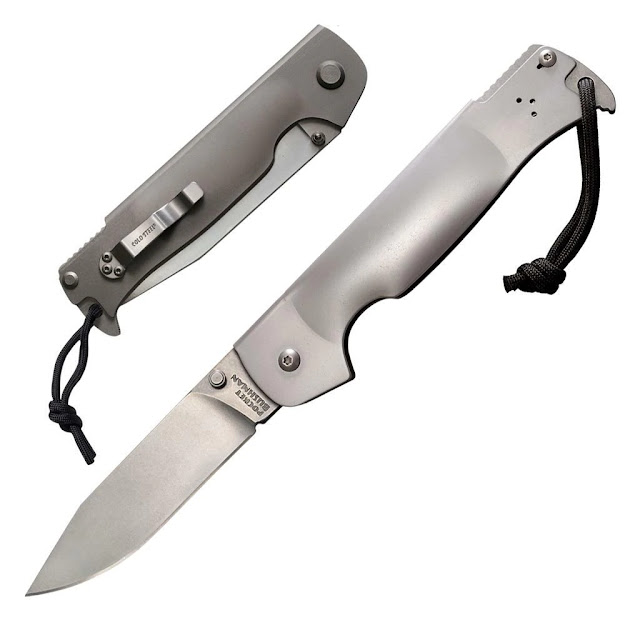 Ron Layton
I've been involved in survival, primitive skills and preparedness for many years. I enjoy teaching and have had many happy students. Please note: Material on these pages is copyrighted. It may be downloaded and printed for personal reference, but not otherwise copied, altered in any way or transmitted to others (unless explicitly stated otherwise) without my written permission. Hypertext links to other Web locations are for the convenience of users and do not constitute any endorsement or authorization.