skip to main | skip to sidebar

This is an article about rabbit sticks. Some folks call them throwing sticks which can cause a bit of confusion because atl atl's and throwing boards, related to dart throwing, are also called throwing sticks. The rabbit stick was used over a large part of North America since prehistoric times. It was most popular in the west and southwest. This is due to the open areas and the ease of seeing game at a distance. I have seen some rabbit sticks which were no more than a straight piece of limb with no wood removal including the bark. These must be the most rudimentary form of rabbit stick. Most tribes used a refined stick that was carved to an aerodynamic shape like an airplane wing in cross section. This made the stick glide over the ground for a long distance and the skilled thrower could take out a rabbit at quite a distance. Some sticks were not worked to the point of being aerodynamic but they were more heavy and may have been used for larger game like small deer. I have seen some that were almost round in cross section and fairly heavy.

The picture below shows the normal throwing stance for throwing the rabbit stick. Its kind of like throwing a flat stone to skip over the water. Some throwers use the "across the chest" throw which is holding the stick in your right hand with the stick slightly over your left shoulder. Kind of like a frisbee toss. 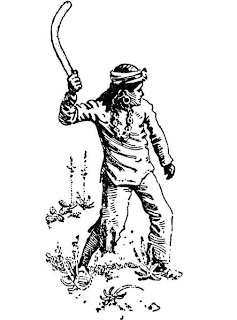 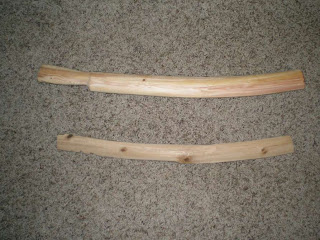 The next seven pictures show the process of working the limb into a rabbit stick. The first photo shows the beginning of the wood removal. I use a small hand plane (shown in fourth photo) to take of shavings on each side until I get an idea of how the shape will come out. 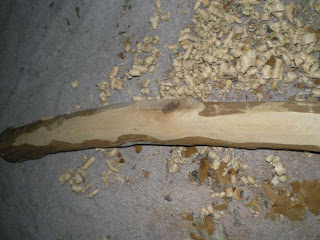 These next two photos show the stick with both sides equal in flatness and ready to start final shaping. 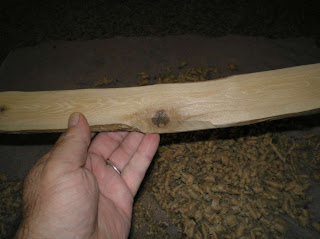 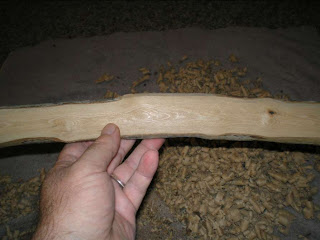 This photo shows the still unfinished stick and the tools I use: a small hand plane and my Gerber Freeman. Not shown is a "four-in-hand" file I use for final smoothing. 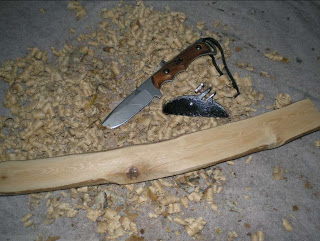 This next photo shows the cross section. 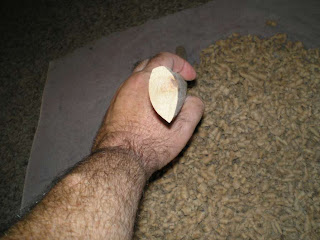 This photo shows the handle which is simply a few notches for a good grip. 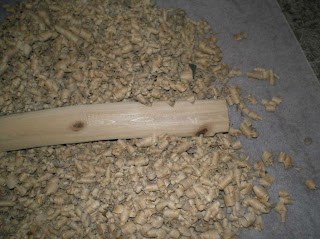 Here's the finished stick. It shows how much wood is removed in the shaping process. I save the shavings for making fire starters and I always carry a big bag full for ready made tinder. 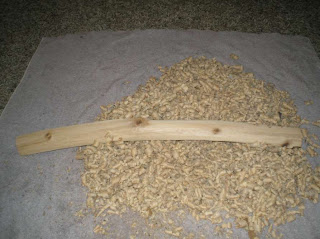 This next photo shows the piece of incense cedar I used to make the big rabbit stick. 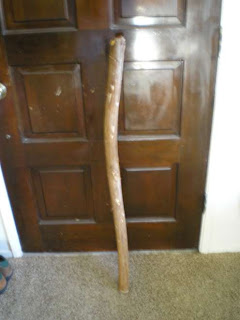 Here's a shot of the end of the stick showing the cross section. This stick is not made to be aerodynamic but to be a heavy killing stick. It's for close range hunting. 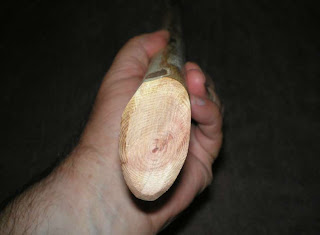 Here's a shot of the handle. Like the sycamore stick, I only used the small hand plane, Gerber Freeman and "four-in-hand" to make this one. 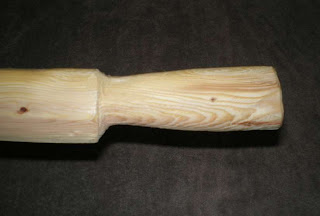 This shot shows how thick the stick is. 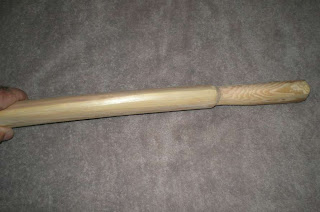 Here's a shot of the finished stick.

If you care to learn more you should check out Paul Campbells book "Survival Skills of Native California". It has an excellent section on the construction and use of rabbit sticks. I fashioned the cedar stick after one made by the Mojave Indians of the Arizona/California border area.
Posted by Ron Layton at 4:06 PM

I remember reading about them in Mannix's book "A Sporting Chance." 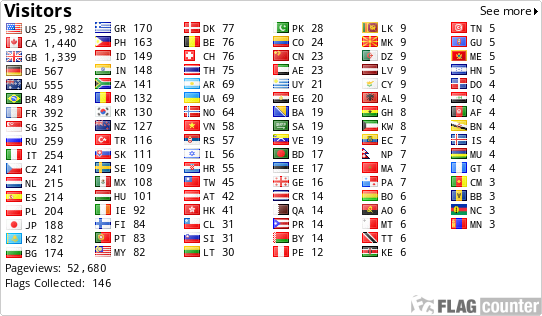 Ron Layton
I'm a single guy who loves the great outdoors and most anything to do with it. The sky is my ceiling and the high desert and mountains my front yard and walls.